Posted on December 2, 2011 by barmagazine

Increasing numbers of bars across the UK are now specialising in gin while we are seeing a steady flow of new and interesting products, leading to talk of a new “gin craze”. Now gin even has its own museum, which has opened above the Portobello Star bar in Notting Hill, west London, celebrating “London gins and gins in London” back to the time of the original gin craze from the late 17th century onwards.

Two rooms above the bar have been transformed into the new visitor attraction which will help to educate the public and the trade about gins in the capital. It is described as London’s second-smallest museum – the smallest is The Faraday Effect which is in a small wooden hut and focuses on Victorian scientist Michael Faraday.

The museum itself, called the Ginstitute, is on the first floor above the Portobello Star, lined with cabinets full of vintage bottles and books. Many are grouped in honour of classic cocktails, such as a bottle of Moët from 1932 for a French 75 or a 60-year-old bottle of Campari for a Negroni. Old bottles of gin include Plymouth Gin from about 1900, Burroughs Black Cat Gin from the 1930s, Booth’s Old Tom Gin from the late 19th century, Nicholsons Gin from the 1920s and an 1894 bottle of genever from Nolet in the Netherlands.

Vintage cocktail books include the Stork Club Bar Book from 1946, the fourth edition of the Savoy Cocktail Book from 1931 and the second edition of Harry Johnson’s Bartenders’ Manual from 1900, which included the first printed recipe for a Martini. In pride of place in one cabinet is a small business card – belonging to the great American bartender Jerry Thomas himself and dating back to about 1882-84. 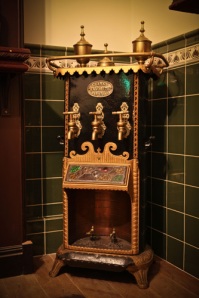 The Ginstitute also has something that few other museums have – a bar right in the middle of the exhibition room, which will make it ideal for both trade and consumer tastings as well as private parties, cocktail competitions and meetings. The room is designed to look like a mini Victorian gin palace, with reclaimed 19th-century furniture and furnishings such as stained glass windows as well as old adverts for gin. There is also something called Clark’s Favorite Bar Stove which was used for making hot drinks – possibly in New Orleans in the late 19th century – and is being restored with help from Hendrick’s Gin.

Upstairs is the Still Room which houses a small 20-litre pot still (pictured above), nicknamed Copernicus, which is used to produce distillates and the bar’s own gin, Portobello Road Gin No.171. The distilled London dry gin has an ABV of 42 per cent and is made of a blend of nine traditional botanicals including nutmeg. It mixes very nicely in the Portobello Star’s Queen Mother Cocktail, which is a twist on a Negroni and uses the late Queen Mother’s favourite vermouth:

Stir all the ingredients together with ice in a glass or shaker. Strain into a cocktail glass and garnish with an orange twist.

The distillates, which fill the shelves of The Still Room, are used in education sessions for visitors who can learn about the different botanicals that go into gin and have a go at making their own to take home with them. There are a number of distillates made on the premises or from Sacred microdistillery in north London. The Still Room’s current range of about 18 distillates – from black pepper and cardamom to apricot stone and orange – is expected to rise to as much as 50 in time.

The new gin, The Still Room and the Ginstitute are the brainchild of the bar’s owner Ged Feltham with fellow director Jake Burger who, with another director Paul Lane, head Leeds-based bar operator Leelex. The museum is curated by Jake who also heads up the gin-making workshops in the Still Room and is master distiller for Portobello Road Gin No.171.

On my own visit to The Still Room, I was taken through the process of blending distillates to create my own personal gin, under Jake’s supervision. Rather than stick to just the conventional botanicals, I took advantage of some of the more unusual ones available. However, even with juniper, coriander, liquorice and cassia bark included, distillates of kumquat and of Royal Air Force Tea (from Henrietta Lovell’s Rare Tea Company) were perhaps a step too far for a beginner. The recipes are kept on file in case someone wants to make more in the future, but it might be best for some of us to leave it to the experts.

The Ginstitute is open during the daytime for free to the public from 2pm to 6pm and by appointment in the evening. Cocktails are served in The Ginstitute on Fridays and Saturdays from about 9pm until 12.30am closing, and it is set to be used for trade and consumer events for different gin brands. People can visit The Still Room by arrangement while sessions are run every Saturday afternoon where places can be booked in advance.

Editor of Bar magazine
View all posts by barmagazine →
This entry was posted in Cocktails, Gin. Bookmark the permalink.